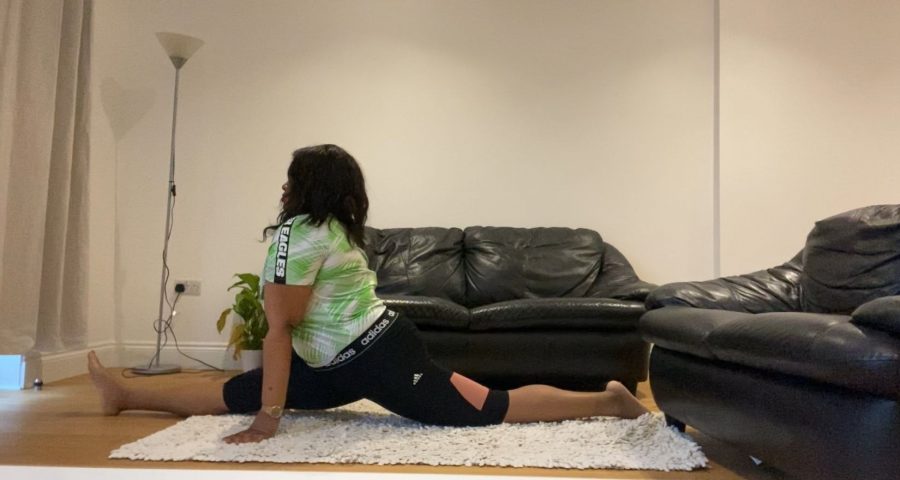 After exhausting all her baking, knitting and wig-making skills in the UK’s first lockdown, Funmi Olutoye decided to put her extra spare time towards finally conquering the splits. 30 days later, she proved once and for all, that “big girls are flexible too.”

Curvy girls often get a lot of stick when it comes to fitness. Apparently, we don’t move. We hate exercise. We’re lazy in bed. So many stereotypes around being anti-movement and anti-“looking after yourself” are often thrown at full-figured women. Personally, I’ve always been really active. I’ve played netball since the age of 8, I mainly run on the treadmill at the gym and I’m partial to a game of rounders in the summer. But there was one fitness challenge that I’ve always wanted to take on: learn the splits.

No-one has ever been directly mean to me about being curvy. However, I half internalised some of the tropes thrown at women my size – one of which was that we’re probably not that flexible and never will be. So, in the first UK lockdown, having exhausted all my baking, knitting, and wig-making skills, I decided to embark on a pilgrimage to getting my splits. I found a challenge online called #JourneytoSplits by fitness guru Cassey Ho (@blogilates). It gives you a range of exercises for you to complete over a 30 day period with the apparent guarantee that you will get your splits by the final day.

How to do a press-up: “This 8-week workout plan took me from fitness beginner to a full press-up”

When I began this in April 2020, I was so pumped. I had a sneak peak on Instagram to see how other splits pilgrims had fared when doing this challenge. There were mixed results but nevertheless, the optimist in me was convinced that I would be amongst those who would glory in the success of getting my splits. At this point I should add, my existing flexibility was pretty much non-existent. I’ve done two yoga classes in my life, both of which made me experience pain I thought only existed in books of fiction. So I think you catch my drift when I say, I had no extra flexibility.

Doing my stretches became my morning routine after praying but before showering. Adrenaline and the novelty of learning a new skill carried me through the first few days and by day four, I started to feel muscles in my legs that I didn’t even know existed. It meant getting out of bed, even for a morning person like myself, became a bit of a struggle. But I soldiered on. By day five, my curiosity was aroused enough to have a go at doing the splits just to see how far I could get and I was genuinely surprised to see how low I could go even at such an early stage.

Having a go so early on was just what the doctor ordered. It was the encouragement I needed to keep going – despite the discomfort from leg muscles which were working hard for the first time in 30 years. I said to myself “if this is me at day five, imagine me at day 30,” and kept going.

By day 5, Funmi was well on her way to getting to grips with certain stretches

As the days rolled on, the discomfort started to seep away. By day 10, I was not only able to hold myself in positions for the full minute, but I was also able to do them with a bit more ease and at times, could even stretch some positions further than the ones pictured in the poster.

A curveball hit me on day 22, in the form of an injury that I thought would set me back 10 months. What did I do? I practiced doing the splits as usual and I could see my bottom was almost flat on the ground. Rather than being happy with that progress, I stupidly pushed myself to try to get an even flatter split and in the process, injured the top of my left leg (which felt like a pulled muscle).

As is so often the case with injuries, I thought that I’d bounce back after a couple of days or, at a push, maybe a week. However, after describing my pain and what I did to a physiotherapist friend of mine, he broke the news that it probably would be a while until I can get back on form. In reality, it wasn’t until February this year that I felt comfortable trying again and even now, I can still feel the strain on my left leg when I go through some of the positions. So for this re-attempt, I’ve had to take it very easy.

I began again on 1 February. Instantly, I could feel just how much of a setback last year’s injury had caused but I was determined to at least give it a go. Last year, this felt like a physical challenge that I was mentally excited to conquer but the second time around, I found it far more mentally challenging. Perhaps that’s because I’ve been through it all before – there’s no novelty element anymore – and also now have to deal with being in a little more discomfort. Either way, it’s meant that I’ve had to dig deeper for a new level of focus in order to complete this challenge.

The first time around, it was day 10 was when things were beginning to get easier; this attempt, it only started to feel easier around day 18 and there were positions that I just couldn’t complete because of my injury.

I would measure my progress by attempting the splits I was aiming for, the forward split, every Saturday. With every passing week, I could see small improvements which I found so encouraging. Despite being in the middle of lockdown 3.0, Saturday night truly became a time to look forward to again.

On the first Saturday, I needed a chair to support me as I made my first attempt. I won’t lie and say it wasn’t heart-wrenching to see how much I had been set back. The following Saturday, I could do something that resembled some sort of split but my posture needed a lot of work. So I was determined that for the next seven days, I would up my game and do each stretch position for more than the minimum 30 seconds and take it up to a full minute. This decision paid dividends. On the third Saturday, I saw a tangible difference. I was a lot lower on the ground than I was a week before.

On the second time around, Funmi started to chart her progress by attempting the splits every Saturday night

Then came the final week. With just seven days left of the challenge, this was probably the toughest week. My legs were sore but the end was in sight, so it became increasingly tempting to say to myself “I’m basically there, I can stop now”. But I carried on because I wanted to finish something that I started a year ago. At this point, it almost felt like a sense of duty – my personal flexibility honour was at stake. (I think I’ve been watching too many period dramas over lockdown!)

I made it to day 30 and honestly, it was a bit emotional. I genuinely didn’t think I’d get here. Yes, my splits still need a lot of work and my next challenge could be to work on my side splits, but I am proud of what I’ve achieved. This was a journey in every sense of the word – physically, mentally and emotionally. I had to dig deep at times when I just wanted to give up. The pain, discomfort and most of all the discouragement I felt when I developed my injury at times really made me question why I was even bothering to do this. I kept reminding myself that I’d embarked on this challenge because I’d always wanted to.

As cliché as it sounds, I truly proved to myself that I can do anything I set my mind to. Believe me, if a curvy so-called “inflexible” girl like me can do the splits in 30 days (minus the set-back), you can. Anyone can.

Get to grips with the windmill move – days 16 and 17 – with our handy How To guide. By using a weight as PT Emma does, you’ll find it much easier to go deeper when you’re in stretch (bodyweight) mode.

Ready to really challenge yourself? Have a go at one of the SWTC training plans. Choose your level and get stronger today than you were yesterday!