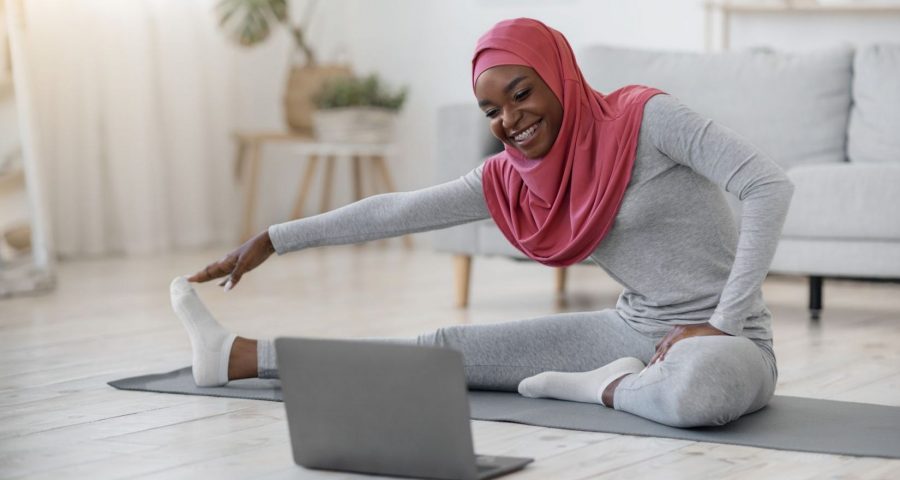 When doctors diagnosed PT and journalist Yousra Imran with a hypermobility disorder, she was told that she’d never lift again. From that moment on, Yousra began a journey of redefining what strength meant to her how she could keep on moving without making her condition worse.

My troubles began when my left hip began popping out during leg raises. “Not a big deal,” I thought, putting it to the back of my mind after finding that I was able to push my hip back into its socket.

In 2017, I was now working as a personal trainer and group fitness instructor in Qatar. I lived for new PBs, tracked how much I was able to back squat and bench press, and spent half an hour before bedtime scrolling through Instagram for “fitspiration”. Fitness was my life. That was, at least, until I started to be plagued by joint issues.

First I developed tennis elbow, followed by excruciating patella tendinitis (inflammation of the tendon between the kneecap and shinbone). A few months later, I had a pain in my lumbar spine (lower back) that would not go away. I was in and out of the doctor’s surgery, spending hundreds of pounds on physiotherapy trying to figure out what was going on. I asked my colleagues at work to check my form – was I deadlifting incorrectly? But they assured me that everything was on point. I put it down to overtraining and did my rehab exercises religiously.

Injury management: why resting is the worst remedy for pain

Things calmed down for a while until my hip joints started popping out again. This time, it didn’t stop at my hips. My shoulder joints began to pop in and out of their sockets, my knees would buckle when I was walking and while teaching an abs class one day, my ribcage began popping too. I was convinced there was something terribly wrong with me.

I saw several doctors who dismissed my worries before I finally managed to get an appointment with a rheumatologist who took my concerns seriously. After a long physical examination, he sat down with me and broke the news: “You have a hypermobility spectrum disorder.” Given that several of my family members are hypermobile and my aunt has severe Ehlers-Danlos Syndrome, the rheumatologist said it was most likely genetic. Faulty collagen DNA – the stuff that makes up our soft tissues – means my ligaments have poor elasticity, causing my joints to subluxate or partially dislocate. It explained the constant injuries and joint pain.

I went from being a PT and gym instructor to being unable to lift weights at all after my diagnosis. That hasn’t stopped me from getting strong, though – I’ve just had to redefine what strength means to me.

But the biggest blow wasn’t the diagnosis. It was what he said next. “If you do not want to cause permanent damage to your joints, you must stop heavy weight lifting and high impact exercise.” I was a fitness instructor – it was my job to teach that kind of exercise. What would I say to my manager?

Luckily my manager was understanding – she gave me low-impact classes to teach like Legs, Bums, and Tums, but I felt defeated. It was the HIIT classes and my powerlifting sessions that made me feel strong. The diagnosis brought me crashing down – I was more fragile than I’d wanted to believe.

I continued coaching for another five months but eventually, the joint pain became too much and I decided to end my dream career. By this time, I had moved back to the UK and was working at a gym in Bradford. I returned to an office job and due to the impact the situation had on my mental health, I was put on antidepressants. I hadn’t stopped going to the gym but I felt my eyes tear up when I watched other people doing the exercises I loved while I plodded along on the cross-trainer.

As I researched frantically for workouts that I could do, I came across a book called Hypermobility without Tears: Moving Pain-Free with Hypermobility and Ehlers-Danlos Syndrome. Written by Jeannie Di Bon, a movement therapist who has hypermobile Ehlers-Danlos Syndrome herself, it provides a step-by-step approach incorporating Pilates that teaches you how to stabilize and strengthen your joints and re-discover your range of movement, while overcoming your fear of pain. My fear of pain and causing further damage to my joints was what was holding me back.

I reached out to Di Bon and discovered that I was not alone in my grief. “Sadly, this is very common,” says Di Bon. “So many of my clients have had their lives changed as a result of an accident, trauma, stress, or viral illness. This seems to trigger the symptoms of hypermobility spectrum disorders such as pain, fatigue, and brain fog. To go with that is a big sense of loss – loss of the life that used to be. People were fit, running marathons, hiking, working full time, and suddenly that seems impossible. I’ve had so many people in tears because of this grief, so mental health can be impacted.”

Following Di Bon’s approach, I built Pilates exercises into a rehabilitative workout that I could do up to four times a week. I started to realise that learning how to support my own bodyweight was challenging and rewarding – swapped heavy dumbbells for resistance bands.

I used to be able to deadlift more than my bodyweight but I had an unstable pelvis, my left glute didn’t fire equally and I didn’t know how to activate my deep core muscles. Pilates has taught me how to focus and isolate the muscles needed to stabilise my joints, preventing them from further partial dislocations. My go-to exercises now are banded glute bridges with a 10-second hold, bird dogs, side planks, isometric leg lifts and banded hip abduction and adduction exercises.

Will I ever be able to return to the activities I once loved, like weight lifting and sprinting? Adam Foster, also known as The Fibro Guy, believes it is possible. Foster is no stranger to chronic pain and the frustration that comes from doctors telling you to stop exercising after an accident or illness; he suffered from chronic pain and migraines following an IED blast while serving in Afghanistan. Now the owner and manager of several rehabilitative exercise studios across the country, Foster uses his own methods for helping clients with fibromyalgia, hypermobility spectrum disorders and chronic pain to go from using mobility aids to weightlifting.

Pilates has taught me to appreciate a new kind of strength. I now work with bodyweight and understand how to isolate certain muscles that stabilise my joints.

“We know through research that pain and damage are not mutually exclusive, yet we find in the studio that many of our fibromyalgia clients are terrified to move through fear of causing damage, as they correlate pain with damage. How you feel subjectively isn’t always an indicator of what’s actually going on in your body, and getting a good base-level knowledge of pain can help you navigate the days when you do not feel your best.”

Speaking to movement specialists like Di Bon and Foster has made me confident that nothing is impossible. The mind and body can learn new movement pathways that minimise pain. It will take hard work and consistency, but it is my dream to one day be back in the fitness studio instructing a group exercise class again.

Whatever new heights I manage to reach in my ongoing strength journey, there is one takeaway that will always stay with me: there are many types of “strong” and strength is not limited to one type of workout. Whether you are an Olympic lifter, regular swimmer, weekend runner or daily yogi, you are strong.

Check out the How To library for 100s of bodyweight moves that’ll strengthen and lengthen every muscle in your body.