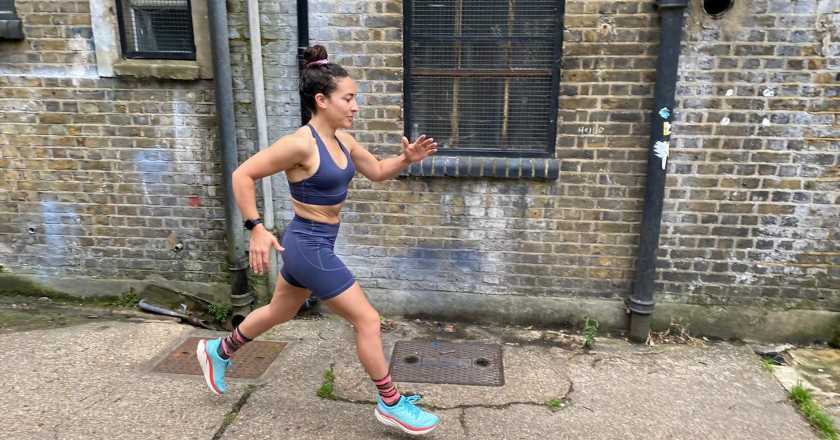 Think you’ve got to run or go to the gym every day to get fitter? Think again. Strong Women editor Miranda Larbi says that she feels fitter than ever, despite having cut back on gym time. Here’s why.

I’m the fittest I’ve ever been. Maybe that’s what you’d expect from a fitness editor , but thanks to holidays, the cost of living crisis and the pandemic, I’m still struggling to return to the gym with the same regularity that I used to think necessary pre-pandemic. And yet here I am, feeling fitter and generally more healthy than ever.

Last week, I was on holiday around the mountains of Portugal. Every day started with a run; my go-to routes are all up-hill, down-dale and usually, the shortest loop (4K) feels tough. For the first time, however, I managed to do a double lap of that route, in between longer runs – talking to my partner the whole time. I last ran the same route three years ago when I was significantly leaner and did it far slower (and only made it round once round). Back then, I went to the gym six days a week, often running 8km a day to work.

While I’m a massive fan of Blok Strength classes and treadmill sessions at places like Barry’s and Victus Soul, I genuinely believe that feeling comfy while running has very little to do with my time spent at the gym (I go once a week at most). With that in mind, here are all the things that have made me fitter this year.

Running: should you run every day? We asked a fitness trainer for advice

Getting 10,000 steps via short, regular walks

Who hasn’t taken up walking since Covid? It seems crazy to think that it took the whole world being brought to its knees for many of us to discover the many health benefits of walking. If working from home, I always head out for a gentle walk at lunchtime and another preamble after work. Sometimes that midday walk lasts for 30 minutes, sometimes it’s only 10 minutes – but I try to reach 10,000 steps by the end of the day.

In a report that included findings from multiple studies, researchers found that walking reduced the risk of cardiovascular events by 31% and cut the risk of dying by 32%. These benefits were equally prevalent in men and women and were apparent by covering just 5.5 miles a week at a speed of two miles per hour.

All that steady walking adds to the day’s step count, helps to shake off any stiffness from working at a desk and builds a little endurance without putting any pressure on the joints. It’s also a great opportunity to calm the mind; plenty of studies have found that going for a 30-minute brisk walk can help to reduce anxiety and depression, lift mood and boost self-esteem.

Cycling rather than using public transport

The day that I chucked away my Oyster card marked a massive change in my life. I’d been cycling in London for about a year before I decided to make a firm decision to prioritise my bike over public transport for good.

Since then, I’ve cycled for my groceries, to work, to meet friends, to my parents’ house. I’ve cycled from east London to Brighton and Cambridge. I cycle everywhere. Not only does it save me money but it’s had a massive impact on my mental health because I’m able to move at my own speed through lots of green spaces (a finding confirmed by a Cycling UK survey which found that 91% of the 11,000 people interviewed said that cycling was very important to their mental health).

And, of course, clocking up an hour of low-intensity steady state cardio (LISS) has worked wonders for my overall endurance without increasing inflammation. Compared to the daily HIIT classes I used go to (via the Tube), I’m less bloated, fatigued and more cardiovascular fitness. I love talking throughout runs and I’m able to do that, I’m sure, thanks to cycling.

Cycling has made me fitter and less stressed.

Prioritising sleep (including sleeping in if tired)

All that cycling has had a knock-on effect on my sleep. When I was a daily-gym goer, my sleeping patterns were atrocious; I’d feel tired and wired at the same time, all the time. In recent months, however, I’ve been able to drift off the sleep quickly and stay that way – sometimes waking up past 7am.

A study of over 8,000 people from the University of Georgia found that low-intensity cardio workouts like cycling improved sleep patterns.

For the past year or so, I’ve made a conscious effort not to use technology in the bedroom. I never work from bed, turn my phone on airplane mode at night and only use my iPad in the morning to read the papers – never in the evening.

Crucially, I’ve also started to use blackout curtains. For 30 years, I went to bed with the curtains wide open and only realised recently how much of an impact that was having on my ability to actually go into a deep sleep. Light pollution can play a massive role in insomnia and sleep disturbances so if you can see your hand clearly with the light off in your room, it might be time to take action to make it darker and more conducive to sleep.

Hands up if you’ve ever given up or significantly reduced your carb intake in a bid to get ‘healthier’. I was that person — going for gluten-free crackers and rice cakes over real bread, rice and quinoa — for years. Aside from being downright miserable, going carb-free makes it so much more difficult to exert energy and power when you need it. According to the NHS’ Eatwell guide, complex carbs like beans and brown rice should make up around a third of your diet.

Eating more carbs — bread, pasta, rice, tonnes of veg — has improved my mood, given me a lot more energy and again, improved my endurance while running. You don’t need to carb-load ahead of a long run if you eat a decent amount of carbohydrate on a daily basis.

Rest days are so important but they can be difficult to schedule in if exercise is part of your self-care regime. Contrary to popular belief, however, you don’t have to be totally static on your rest days; I try to walk and/or do a little mobility or yoga session on the days when I’m not exercising just to keep the body ticking over. The result is feeling calm and relaxed, and not having unbearable DOMS.

The other thing I swear by is using a massage gun to reduce stiffness and DOMS on the days in between workouts. You want to have at least two rest days a week, and perhaps more if you’re doing really intense classes or runs. Remember, it’s during those periods of rest that your muscles are able to repair and grow; that’s how you get stronger. Keep working out every day and you’re actually stopping your body from meeting its strongest and fittest potential.

Stretching more (even if it’s only for 5 minutes)

Like most very tall people, my boyfriend has a bad back and, as such, always seems to be stiff. Over lockdown, I plonked him in front of my FIIT app in ad bid to quell the moaning. The pilates classes have worked wonders, so much so that when he’s not running, his days now seem to revolve around Gede’s 25 minute pilates sessions.

Through seeing how much good it’s done him, I’ve started joining in with the odd class — whether that’s for an in-person reformer pilates class at a studio near me, doing a FIIT session or spending time really stretching out after a long run. It does make a difference and as we get older, stretching becomes more important. It has to take precedent over running off and getting stiff.

Sometimes, I hop on a 10-minute stretch class but if I want a more full-body shake out, I pick a four minute song, close the curtains and do a stint of ecstatic dancing. All that means is moving your body to the music as you see fit, rather than trying to ‘dance’.

“I ran before, during and after work for a month and it changed my running regime for good”

It’s really easy to set yourself a goal and to work towards it every day by running the same distance. What you really want to do, however, is to have a variety of runs in your weekly schedule and that’s probably going to mean running less but going harder.

I’ve gone from running 10km daily to taking whole weeks off and running much slower on the days I do head out for a 5K. That’s meant that when I do want to try for a sprint finish, I have that energy in my legs, and my cardio capacity feels higher than usual.