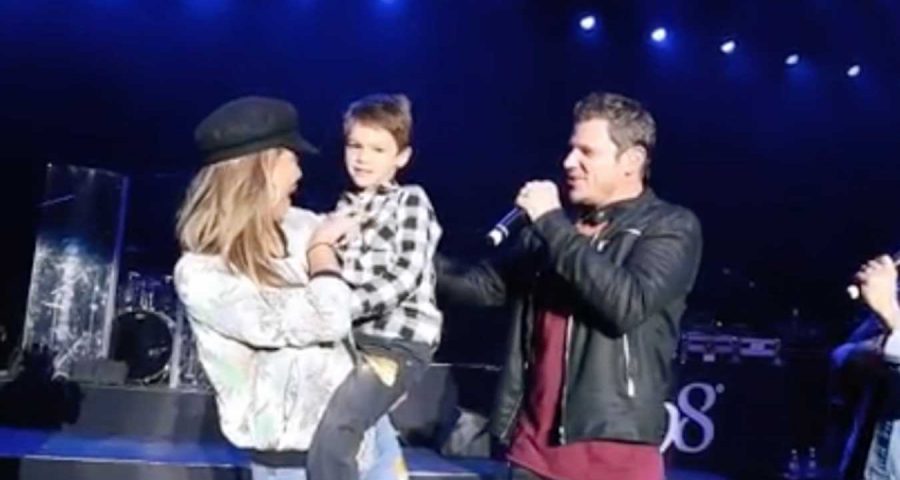 That’s one way to have “Happy Birthday” sung to you!

Lucky Camden John had Nick Lachey‘s entire concert audience to serenade him as he turned 7 on Thursday night at the Washington State Fair in Puyallup, Washington, where his dad performed alongside his 98 Degrees bandmates and Boyz II Men.

In the sweet video Nick, 45, posted to Instagram, his wife Vanessa Lachey carries their oldest child out from backstage. And though Camden looks a little shy, he smiles throughout the song — led by his dad and uncle Drew Lachey, with total commitment from the cheering crowd.

“A special moment for all of us,” Nick captioned the clip. “Thank you to everyone who helped make Camden’s 7th birthday one he will never forget. Happy birthday kid!! 🎈”

Vanessa, 38, spent the day with the birthday boy, sharing videos and photos on her Instagram Story of the duo on their way to the fair. But first, they stopped at one big landmark, at his request: the Space Needle in Seattle!

A subsequent photo showed Camden flashing a big smile from backstage at the fair, waiting for his dad to start his performance, while a later video featured him and Vanessa rocking out in a selfie-style video to the group’s cover of Justin Timberlake‘s “Can’t Stop the Feeling!”

“The moment after my first born, the little guy who made me a Mama 7 years ago today, went on stage while his Daddy & the boys sang Happy Birthday in front of the most amazing fans,” she captioned a pair of snapshots showing her looking emotional after their big appearance, then hugging her son tightly.

“I Love You Camden John! Happy 7th Birthday,” Vanessa added. “I don’t know how you do it, but you manage to make my heart grow more and more every day! ❤️”

2019 marks the first year all three of the Lachey children — Camden, his 2½-year-old little brother Phoenix Robert and younger sister Brooklyn Elisabeth, 4½ — will be going to school. And their mom has a plan.

Why? “So when you wake up, you can just be present and ask them if they’re excited about school, if they’re ready for their day,” explained the Top Chef Junior host. “Just enjoy the moments that go by way too fast.”

And Camden, who will be starting first grade, “is my little sports guy,” Vanessa shared. “You name it, he does it. He wants to try everything. He’s so active. He does not stop.”