A three-year-old girl was diagnosed with a rare cancer of the nasal cavity after doctors dismissed her runny nose as just a sinus infection.

The unnamed toddler complained of pain and swelling in her right cheek, as well as having green, blood-streaked mucus seeping from her right nostril.

After twice being prescribed antibiotics and nasal drops for a suspected eye and sinus infection, medics finally performed an MRI scan.

The scan revealed a large tumour in the youngster’s nasal cavity, which had invaded the bone at the root of her nose, the base of her skull and the muscles she used for chewing.

Parts of her brainstem, which controls breathing, sleeping and blood pressure, had also become cancerous.

The girl, who is believed to be from Camberley, Surrey, immediately started an aggressive course of chemo and radiotherapy. It is unclear how she is doing. 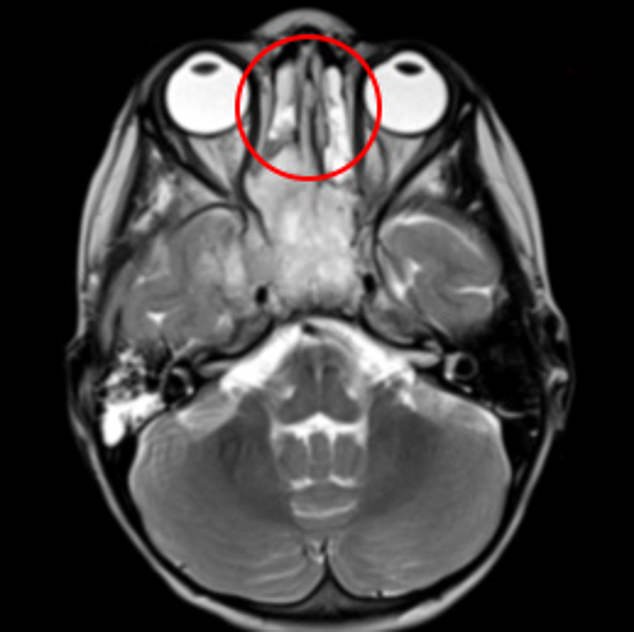 After finally having an MRI scan, doctors discovered the unnamed three-year-old was suffering from cancer of the nasal cavity. The tumour (circled) had invaded the bone at the root of her nose, the base of her skull, the muscles she used for chewing and even her brainstem

She also developed redness around her right cheek, jaw and eye.

Doctors diagnosed her with periorbital cellulitis – infection of the eyelid and sections of skin around the eye.

They prescribed her oral antibiotics but those didn’t work.

When her symptoms persisted, the girl was taken back to her doctor, who carried out blood tests, as well as ultrasound scans of her neck and salivary glands.

The tests came back as normal and the girl was diagnosed with mumps, which has no recommended treatment except rest, painkillers and drinking plenty of fluids.

When her symptoms still did not get better, she was eventually given more antibiotics as well as nasal drops for a sinus infection.

However, the youngster still showed no sign of improvement.

Three weeks after her symptoms began, she finally had a brain scan when she developed a squint, pain while eating and increasing difficulty breathing through her right nostril.

The scan revealed she was suffering from parameningeal rhabdomyosarcoma – cancer of the bone, and soft and connective tissue in the nasal cavity.

The disease had not spread elsewhere in her body.

On the back of this case, scientists from Frimley Park Hospital, where the girl’s MRI was taken, are urging doctors to consider nasal cancer if a patient has a persistently runny nose in just one nostril.

Rhabdomyosarcoma is the most common type of childhood cancer that affects the soft tissue.

It usually occurs in boys aged between two and four years old.

Fewer than 60 new cases occur every year in the UK. Between 400 and 500 diagnoses are made annually in the US.

Around 20 per cent of cases affect the membranes that cover the brain and spinal cord, which are found in the nasal cavity and middle ear.

The disease can be difficult to diagnose due to tumours not always showing up in scans.

Although challenging, an early diagnosis is important to prevent the cancer invading the face and skull.

Treatment can also be tricky due to vital organs, such as the brain, typically being affected.

Parameningeal rhabdomyosarcoma is a type of cancer that affects the soft tissue in the nasal cavity, middle ear, head or neck.

Less than 60 new cases occur every year in the UK. Between 400 and 500 diagnoses are made annually in the US.

The cause is often unclear, however, children with certain rare genetic disorders, such as Li-Fraumeni syndrome, have a higher risk.

Treatment depends on the tumour’s size and position, as well as if it has spead.

Chemotherapy is often used to shrink the tumour before surgery, as well as post-procedure to prevent the cancer returning.

Surgery is usually necessary to remove all or as much of the tumour as possible without damaging the surrounding tissue or organs.

If surgery is not an option, a combination of chemo and radiotherapy is required.