The concept of “intermittent fasting” is a modern diet trend – and one with a long history.

“Intermittent fasting is not a new thing,” says Jules Galloway, a naturopath and functional medicine practitioner in Byron Bay. “It’s just been repackaged in a way that suits our busy lives.”

This modern form of fasting, also called IF, has been gaining in popularity. The most common IF approach is the 16:8, which means you “fast” for 16 hours, and restrict eating to an eight-hour window. This may mean eating between 11am and 7pm, or whatever suits your schedule. 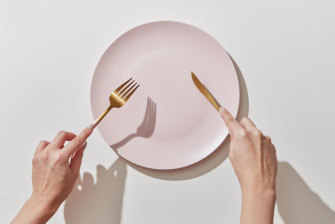 “I look at intermittent fasting as a lifelong solution to my own healthy eating.”Credit:Stocksy

“If you’re skipping breakfast, all it takes is a little mind over matter to get to 11am,” says Galloway “You don’t have to weigh yourself, count calories, learn new recipes, buy special packets. I can see why it’s so popular – it’s very user-friendly,”.

“My weight gain was a running joke amongst friends and peers,” she says. “Working in travel means regular over-indulging in food and wine. I was sitting down to three-course lunches and degustation dinners while joking about my weight gain. And then it stopped being funny.”

Bath began IF with the help of Zero, a fasting app developed by Kevin Rose, a US entrepreneur. Rose’s interest in IF was piqued after he learnt that Hugh Jackman used it to get into shape for his role as Wolverine. The app tracks several different fasting approaches, including the sleep-wake circadian rhythm which operates over 24 hours.

Research by Satchin Panda, a biologist at the Salk Institute in California, and author of The Circadian Code, suggests time-restricted eating and drinking is beneficial to health when limited to between eight and 10 daylight hours.

Bath now fasts for at least 16 hours each day to maintain the 15 kilos she’s kept off for well over a year. She eats a meatless diet that includes lots of whole foods and healthy fats and limits alcohol to red wine. IF is working for her but she insists it’s not a “crash diet”.

“I look at intermittent fasting as a lifelong solution to my own healthy eating,” she says. “There are loads of studies coming out about the long-term benefits.”

Intermittent fasting is widely used as a weight-loss tool, but there are other benefits – and, as with many health trends, potential pitfalls.

“I think it can do wonders for balancing blood sugar, resetting appetite and reducing sugar cravings,” says Galloway. “However, there are some people I wouldn’t recommend IF for. These include people with adrenal dysfunction. Fasting has been known to increase cortisol levels, and if a person’s cortisol is already high, fasting could make their health worse.”

Clare Collins, professor of nutrition and dietetics at the University of Newcastle agrees that intermittent fasting should not be regarded as a long-term solution to weight loss.

She explains, “There are other ways to reduce your kilojoule intake if you’re seeking to improve your weight and weight-related health.”

Although Collins doesn’t readily advocate intermittent fasting, she says it’s raising consciousness of the outsize role food occupies in society. “These approaches to intermittent fasting are helping people to reacquaint themselves with the feeling of being hungry. It’s good for people to realise that they don’t need to eat six or seven times a day.”

Collins suggests speaking to a health professional before trying IF for health reasons, advising, “Ask your GP for a referral to a practising dietician.”

This article appears in Sunday Life magazine within the Sun-Herald and the Sunday Age on sale August 18.