Ask Dr Ellie: Did diabetes take my sense of smell?

Six years ago, I lost my sense of smell. It’s started coming back and is now at about 80 per cent. Did my type 2 diabetes have anything to do with it?

Loss of sense of smell is called anosmia. There is a wide variety of causes including problems with either the nose itself, the sinuses and airways, the nerves and the brain. Infections such as sinusitis, benign fleshy growths inside the nose called nasal polyps, some medications and allergies are common causes of short-term smell loss.

More serious causes could be nerve damage, a stroke or a tumour. In these cases, the sense of smell won’t usually come back spontaneously. 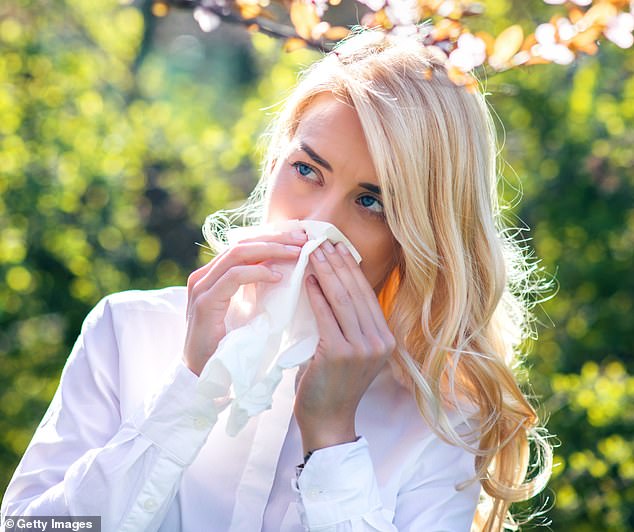 Loss of sense of smell is called anosmia – there is many causes including problems with either the nose itself, the sinuses and airways, the nerves and the brain (file image)

However, there have been many cases of patients with brain injuries who recover their sense of smell some five or ten years after sustaining the damage as the nervous system controlling sense of smell is sometimes able to repair itself.

Type 2 diabetes can occasionally cause nerve problems called neuropathy, which may affect the nerves controlling your sense of smell.

If the anosmia has almost completely recovered, it’s likely the cause was medication.

And while over-the-counter antihistamines are often the first line of defence, some people find they simply don’t work.

But don’t despair. Your GP can discuss with you safely doubling – even trebling – the dose, or switching to a stronger, prescription variety.

And don’t forget simple pollen-avoidance measures too, such as sunglasses, shutting windows and using a pollen filter in the car.

Just rubbing Vaseline around the nostrils can also capture tiny pollen particles before they get into your system.

Medications typically prescribed for type 2 diabetes patients such as amlodipine, enalapril and some statins, and thyroid medication are all known to cause these kinds of changes.

My wife is 84 and sleeps terribly at night but falls asleep frequently in the day. Can anything be done?

It is extremely common for sleeping patterns to change with age. However, if there has been a marked change, there may be one or two specific causes.

Tiredness is a side effect of types of medication and this may be exacerbated if a person is taking several together. Common culprits are pills for pain, heart conditions and antidepressants. Discussing side effects and doses with a GP would be sensible if drowsiness is interfering with your everyday life. Doses can be lowered to improve the situation. Another cause of tiredness is Vitamin B12 deficiency. This nutrient is found in meat, offal and fish. GPs may recommend injections if low levels are discovered. More serious conditions such as heart-valve disease or cancer can also deplete energy levels.

Since medicinal cannabis was legalised last year, I’ve regularly been fielding requests for cannabis from patients hoping to treat everything from headaches to skin conditions.

But GPs are not set up to provide cannabis prescriptions, even for the very specific conditions it was legalised for.

So I find it unhelpful that the Health Secretary, Matt Hancock, announced last week that doctors should be doing more to help provide it for patients in need.

We are as equipped to prescribe cannabis as we are rhubarb – for a GP, there are no recognised formulations, dosing guidelines or regimes, even for conditions such as epilepsy. Currently, all requests are dealt with by a specialist panel which scrutinises every case.

I can’t see how Mr Hancock expects us to do more.

Without the scientific evidence base behind cannabis prescribing, or even specific medications to supply, his empty comment is not going to help patients.